World of Associations News (UIA) - Interview with our President

By Professor Dimitris Kaliampakos, Dean of the School of Mining and Metallurgical Engineering, National Technical University of Athens, President of the Associated research Centers for the Urban Underground Space (ACUUS)

"Due to the ongoing COVID-19 pandemic, you have decided to host the 17th World Conference of Associated research Centers for the Urban Underground Space (ACUUS), which was supposed to take place in Helsinki, Finland, virtually. What sparked the decision to host an online event instead of postponing the in-person Conference to a later date, as many other associations have?

The COVID-19 pandemic is drastically changing the entire world. It has also affected the core scientific and technical field of our organization. For example, most experts agree that mass transit systems in urban areas should drastically change the way they operate in the post COVID-19 era. This is a vital question for every big city, let alone megacities, which we cannot afford to postpone, not even a day.

As this is your first virtual event format, how has the planning and organization changed?

Some of the fundamentals of our conferences, like the high quality of the scientific papers and the strict peer-review process, have remained unchanged. What has indeed changed is the efforts of the organizing committee to create an almost “real” conference environment and the presenters to make their speeches more powerful and effective using the latest technological tools.

Can you give us an impression of what the virtual Conference will look like for attendees?

Together with the organizing committee, we have spared no effort in trying to make our participants feel as though they are in a true conference room. There will be Q&A sessions and the presenters will be able to interact with their audience. There will also be some nice “surprises” that will stimulate interest and personal involvement.

Going back to large in-person events will take some time to get used to. Are you concerned this may affect the number of attendees in the future?

I am not quite sure about this. On the one hand, people around the world as well as the scientific community are in deep shock that, most probably, will take several years to recover from. On the other hand, this could also have the opposite outcome: the day after we feel that the pandemic has ended we could see a rebound effect to travelling, maybe with some permanent cut down to unnecessary travels.

The MICE industry has been heavily affected by the COVID-19 pandemic. How do you think this will change our industry, and what measures can be taken, in your opinion?

Definitely, the challenge is huge. However, since the MICE industry has already developed an easier and efficient way to move on, I believe it should now turn its attention first to making it resemble the in-person experience as closely as possible. Then, in the post COVID-19 era, it should focus on taking the full advantage of in-person meetings. I truly believe that there is no substitute for the combination of a good, skillful speaker in front of a vibrant and enthusiastic audience."

Pierre DUFFAUT, Ph.D., is graduated in Mining engineering from the Saint Etienne School of Mines, 1948. He has now 94 years old. Mr. Duffaut co-founded in 1989 Espace souterrain, a French non-for-profit organization and became its Vice-President and then its President. It will be integrated in 2005 to AFTES and known now as COMES (Comité Espace Souterrain). He also been President of Honour of AFTES. He received also from ITA, in November 2014, the International Tunnelling Award for his Life Time achievement. Pierre was nominated as an Honorary Member of ACUUS in 2019.

His best-known books are:
Manual of Rock Mechanics (4 volumes) 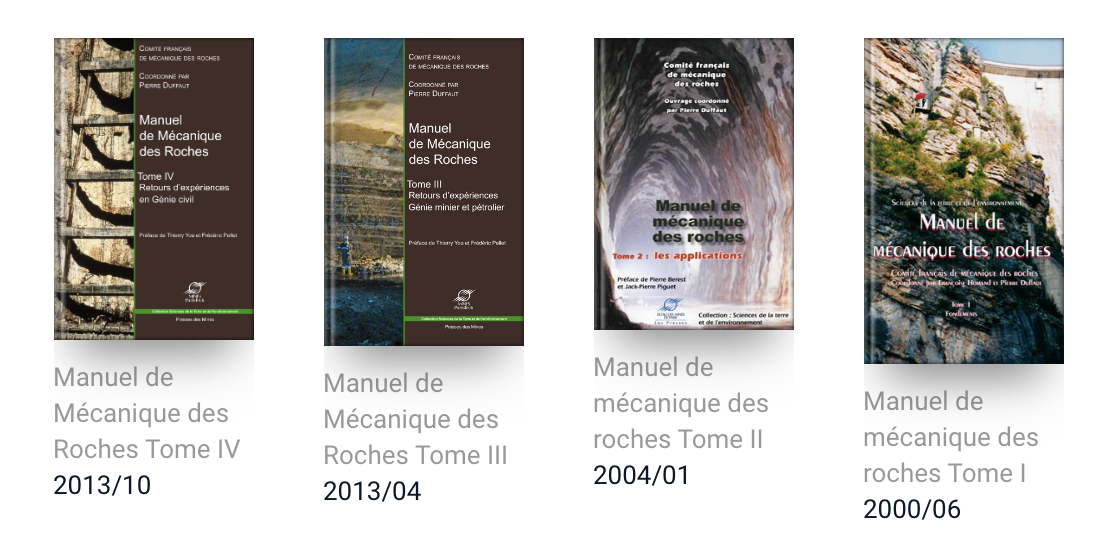 Harvey Parker, past president of the International Tunnelling Association

It is with great sadness and a heavy heart that we have learned of the passing of Dr Harvey Parker on May 5, 2020. He served as past president of the International Tunnelling Association , and was awarded with the 2019 ITA Lifetime Achievement Award. With over 50 years of experience in the tunneling industry in the US and around the world, Dr. Parker has made significant contributions to signature tunnelling projects through leadership and expertise. He has been involved with many iconic projects. We will remember him fondly.

John Charles Carmody, aged 72, died on December 9, 2019, after a long and heartbreaking illness. He was born in Minneapolis, USA. John's near 50-year career began as an architect with the Peace Corps in the Dominican Republic, after which he enjoyed a long and fulfilling career at the College of Design at the University of Minnesota as a student, researcher, mentor, teacher and Professor. He was Associate Director at the Underground Space Center for many years and founding Director of the Center for Sustainable Building Research. He was the recipient of numerous awards, a prolific writer, international speaker and author of more than a dozen books. His best known books are:

John also participated as a speaker at the 6th ACUUS International Conference in Paris in 1995.

The appointment of Fellows is a tradition now well established. Without wishing to leave these Fellows appointments at each of our biannual conferences, it was time to recognize also some of our most faithful members, as Honorary Members in the year between two conferences. In the current case, they are still alive and retired. For 2019, two pioneers of the underground, well known in France and abroad, were nominated. Both involved in the AFTES (Association Française des Travaux en Souterrain), they are Pierre Duffaut (at the left) and Jean-Paul Godard (at the right). Their Honorary members certificates were given to them at Paris-East University (UPEM), in Marne-la-Vallée, on May 10, 2019.

Pierre DUFFAUT, Ph.D., is graduated in Mining engineering from the Saint Etienne School of Mines, 1948. He has now 94 years old. Mr. Duffaut co-founded in 1989 Espace souterrain, a French non-for-profit organization and became its Vice-President and then its President. It will be integrated in 2005 to AFTES and known now as COMES (Comité Espace Souterrain). He also been President of Honour of AFTES. He received also from ITA, in November 2014, the International Tunnelling Award for his Life Time achievement.

Jean-Paul Godard is a civil engineer, graduate of the « Ecole Nationale des Ponts et Chaussées » in France. He has now 79 years old. He is an Honorary Senior Executive of the « Paris Transportation Authority » (RATP), where he has been working for 36 years in different positions: construction of new metro lines and stations, study department, foreign metros, and project management. He retired in 2001. He has been Vice President, from 1996 to 2004 for AFTES and from 1998 to 2001 for ITA.

Each month, Women In Tunneling features an exemplary female member of the tunneling industry. For June 2019, this particular trailblazer is Sanja Zlatanic, SVP of HNTB Corporation! Read the interview with Zlatanic about her involvement in the industry, how she got started, and what we can do to bring more women into this exciting field.

On January 23, 2019 ACUUS met in the HNTB offices at the Empire State Building for its North America Management Meeting.  In attendance were; Sanja Zlatanic – HNTB, ACUUS Board, Priscilla Nelson – ACUUS Board, Dr. Amy Huanqing Li – Manager of Services to Members, Shivani Patel- ACCUS North America Young Member Group, Dorothy McKie ACUUS North America administrative assistant, and potential members (Dominic Reda and Alfredo Valdivia of Gall Zeidler, and Gloria Lau of HNTB). The management meeting hosted by Ms. Zlatanic covered ACUUS activities with UN-HABITAT, World Urban Campaign and the forum at World Cities Day in Shanghai (October 31st, 2019).  Dr. Amy Huanqing Li presented a detailed Secretariat report of ACUUS activities, targeting priorities in the USA, marketing strategies and immediate goals (link to the presentation below). A major emphasis was placed on setting up Youth Group Americas with Shivani Patel as Chair.  This group will support the World Cities Day youth forum activities and collaborate with UCA Youth Committee for this major event to be held in Shanghai on 1st - 3rd November where ACUUS would be represented with its forum.

The Underground Construction Association of the Society for Mining, Metallurgy & Exploration (UCA of SME) top awards

The Underground Construction Association of the Society for Mining, Metallurgy & Exploration (UCA of SME) is pleased to announce the recipients of its top awards. The presentations will be made during the Awards Dinner on Tuesday, June 26, 2018, during the North American Tunneling Conference (NAT) in Washington, D.C.

One of the top awards is for Dr. Priscilla Nelson, member of the Board of Directors of ACUUS. The UCA of SME's Outstanding Educator Award: Dr. Priscilla Nelson. This award is being presented to Dr. Nelson for her contributions in the field of tunneling and her dedication to the education of a new generation of engineers specialized in underground construction and tunneling in the U.S. In addition, UCA of SME recognizes her initiatives as a role model and inspiration for young female students pursuing advanced degrees in the field of tunneling. The award is presented to professors and teachers who have had an exceptional career in academia and education in the area of underground design and construction.